Bali is a province of Indonesia and the westernmost of the Lesser Sunda Islands. Located east of Javaand west of Lombok. 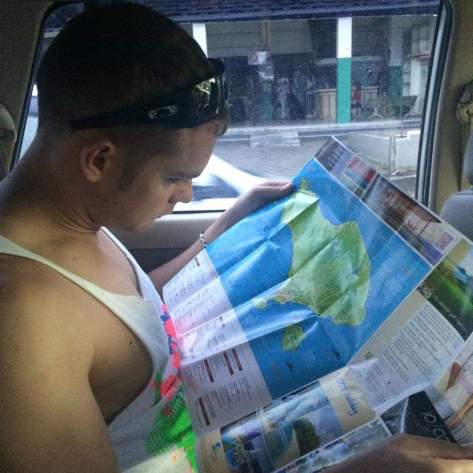 It is a popular weekend getaway for Australians since it is a short flight over to the island from their larger Island with cheap booze, cigarettes and accommodations in comparison. Kuta being the biggest town on Bali, is where you’ll find the largest mix of bars, clubs and expats living a laid back surfer’s life with surprisingly small rolling waves, heaping with plastic and garbage within them.

I was seriously surprised to learn upon arrival and spending a few days on this supposed gorgeously pristine Island that it is actually a 50/50 mix of paradise and the other half a garbage Wasteland. Considering it is advertised and made out to be a popular honeymoon getaway!

Indonesia has a zero-tolerance policy against any form of drugs including marijuana. Your first offense of being caught with any sort of a drug could be an automatic death sentence for you. So I was very shocked while walking around Kuta at night around the bar scene, having so many Indonesian men offering drugs to all the passerby’s. The police are very corrupt on the island of Bali and most of the time they work with the gang members in order to entrap tourists into sticky situations where they will have to bribe the police officers in order to stay out of jail. My advice to you if you were a partygoer an occasional recreational drug user, is to get out of that mindset while on the island of Bali and just drink and have a good time. Also when ordering a drink at the bar or a club make sure to watch your drink very carefully as Bali is known to be a date rape capital. If you order a beer make sure you watch them open it, if you order a drink make sure you watch them make it. My advice to you is to stick with canned or bottled drinks and ask the bar staff to open it yourself. It is seriously no joke in the town of Kuta as a lot of the time even the security staff in the bar is in on the scam.

I had chosen to stay at a resort in the small town of Seminyak just north of Kuta. A slightly more upscale laid-back area of Bali without the hustle and bustle of the Kuta party scene. I had chosen the Samaya Resort right on the beach front of the Indian Ocean. The Samaya is a 5-star upscale Resort that was absolutely beautifully pristine. They had their Beach cleaned and raked right up, but on either side of the property line, of the Resort beach, was littered with plastic and garbage everywhere as far as the eye could see. Unfortunately there was no way for them to clean up the water so there would be no swimming. However there was a gigantic pool out front overlooking the ocean and also every suite at this Resort had its own private pool as well as a hot tub. The rooms were magnificently huge it was basically a private Villa. The food and drink at the resort we’re absolutely excellent. Actually the resort had many people show up to it the restaurant from all different parts of the island especially for the fine dining. They literally had a team of 20 people that came to clean your room 3 times per day. They were surprisingly sneaky about it too until one day I had caught them! I had came back to my room early just to grab something quickly and there were 20 people inside, all with their very own tasks to accomplish as quickly as possible. They seemed very shocked that I entered my room and I looked at them all and said “busted”! They all laughed and quickly vacated the room. 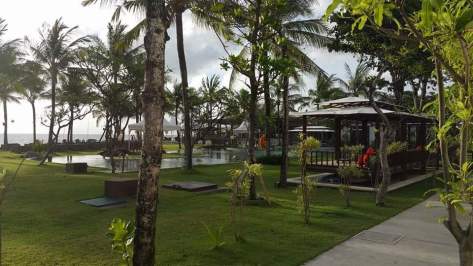 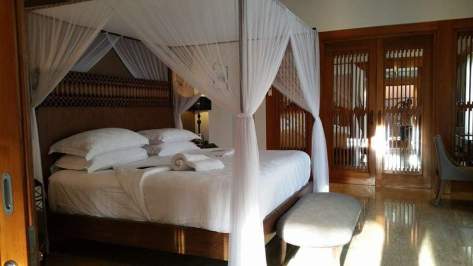 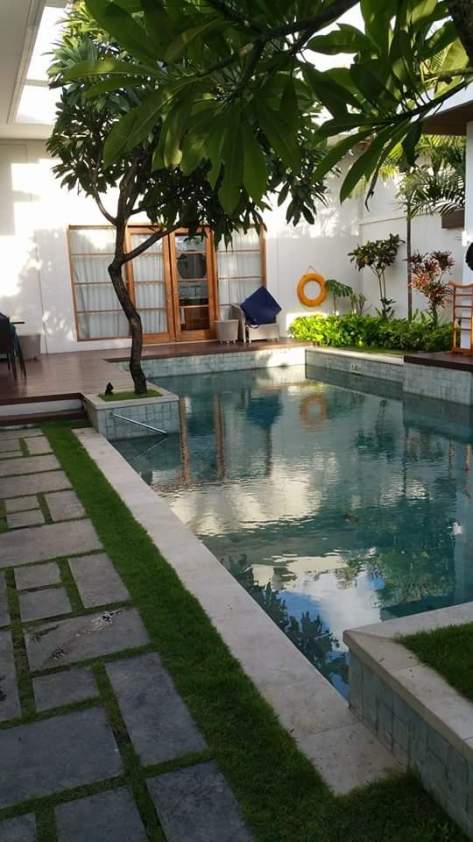 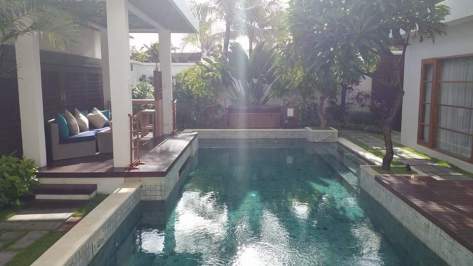 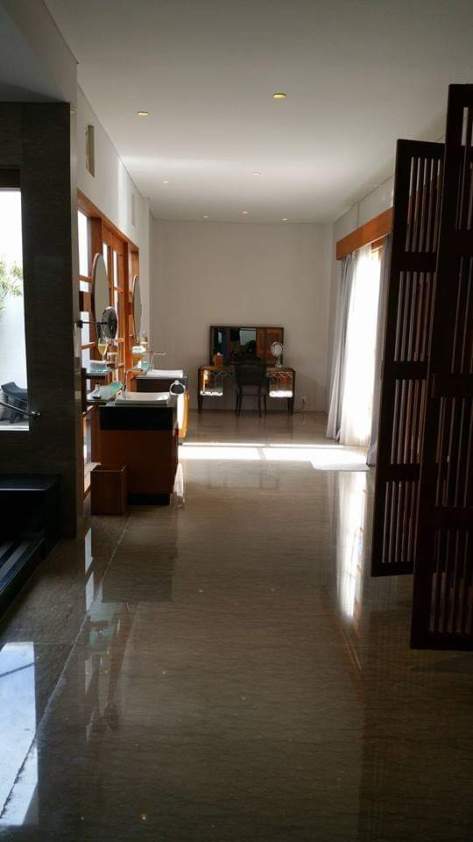 A place I definitely recommend to go chill out for a day and have a few drinks on the beach is Sunday’s Beach Club on the very south of the island. They have a magnificent infinity pool at the edge of a cliff face overlooking the ocean and they have a self-service elevator down the Cliffside to the beach club. It’s a chill out Beach spot with fire pits and bean bag chairs and cheap Bintang beers for you to enjoy. The water down there is also much cleaner to enjoy a dip in. 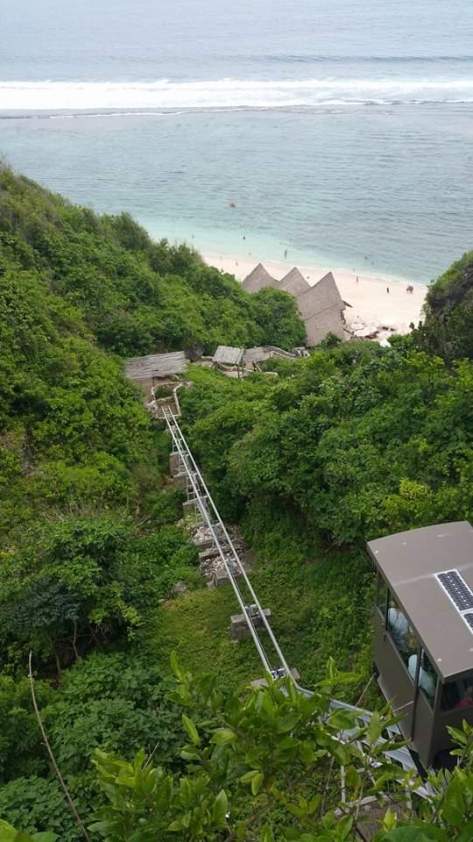 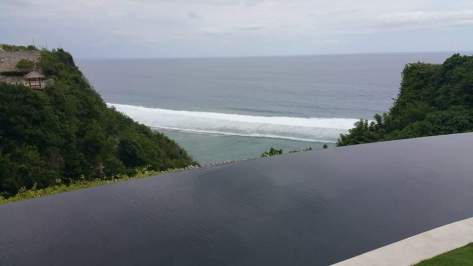 When on Bali you must try the Kopi Luwak Coffee also known as cat poop coffee! The world’s most expensive Brew, readily available in most grocery stores around the world but all originates from Southeast Asia, it is a Coffee Bean that has been eaten by the Kopi Luwak animal which is a small weasel-like creature. The Animal eats only the freshest and most ripe beans whole and as the bean passes through its digestive system it removes all the acidity from the bean. The animal then poops out the Bean completely intact and is later collected, washed and boiled making the perfect acidity free coffee. You should also enjoy a traditional Balinese cigarette containing tobacco with many different spices including blueberry or vanilla if you so desire!

Another attraction of Bali is the many temples and monasteries scattered about the island. A surprising detail about these temples is the signs posted every where’s in which state that women on their menstrual cycle are forbidden from entering. In Balinese tradition it is believed that the spiritual world is divided into equal but very different areas consisting of lower, middle and upper realms. Lower is the wild, chaos, sexuality, birth, blood, Middle is the realm of ancestors and community and the upper is the sky realm belonging to the Goddesses and Gods. That fertility and menstruation was not ‘unclean’ but rather a different energy to that of the temple and sky realm and that these energy’s should not be disturbed.

On Bali you can rent a van with a driver for a low cost of $50 per day that will give you a personal tour of the island or take you wherever you please. There are also many scooters readily available to rent. There are many great sites to see around Bali including the various rice fields on different levels and Terraces, Cliff face hikes, zoos, beaches, temples and there is even surfing and Diving. There are no shortage of attractions and things to do on this island but beware that it is not all it’s cracked up to be. There are many really nice 5 star resorts which are beautiful to stay at, but they certainly come with a cost. In my opinion Bali is very overhyped and not worth it.

Locals- 50/50 mix. If the ones that work i the tourist industry are very nice and friendly however their is rampid gang acactivity and you should be very cautios of locals on the streets in the evenings.